Ground Penetrating Radar (GPR) - a device that is used for location and mapping of subterranean objects, their dimensions assessment and an assessment of their positioning relative to each other with the help of electromagnetic emission.
GPR is applying for searching and analyzing of both metallic and non-metallic objects (schistose structures, pipes, cavities, vesicles, construction parts etc.) 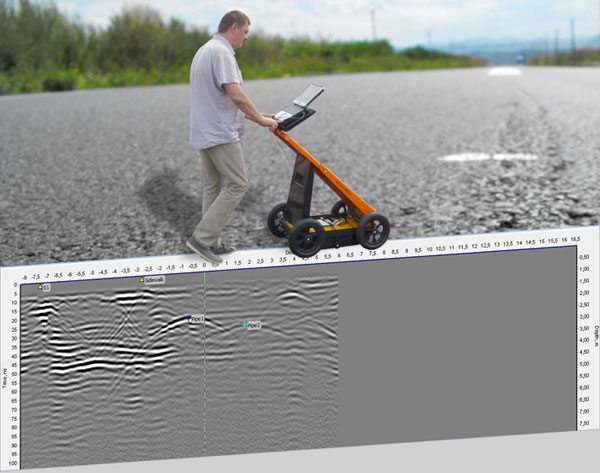 What is the GPR profile?

GPR profile is a two-dimensional image, consisting of a serial set of traces (echo-signals) received from ground sounding by GPR.
Horizontally is showed a way passed by GPR (or traces numbers). Vertically - time scale (on the left) and the depth (on the right). 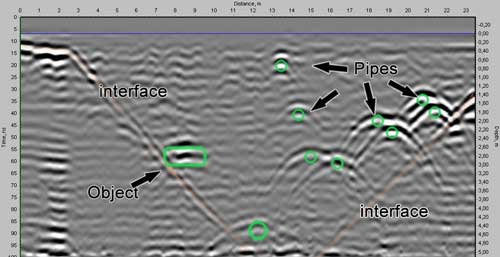 How does GPR works?

GPR emits short electromagnetic impulses towards the structure that is being explored and then detects and analyses reflected and scattered by some underground heterogeneities signals.
Each received echo-signal (or a trace) consists of different underground object reflections that were caught by GPR antenna. Reflected signal amplitude depends on heterogeneity size and on contrast between its boundaries and its surroundings.
The object's boundaries are more contrasting - the amplitude of reflected signal is higher. 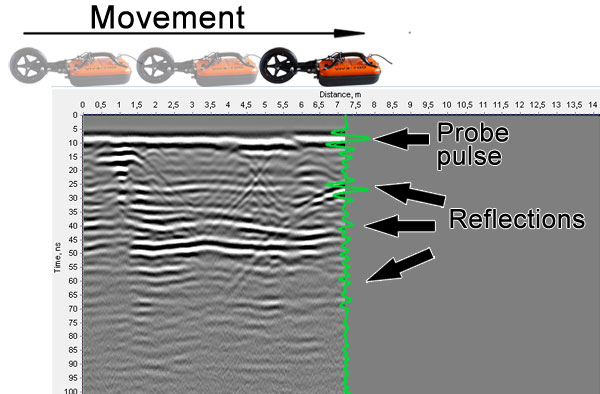 How deep can GPR see?

Maybe the must influencing factor for GPR penetrating capacity is material in witch target is surrounded or covered by (soil, sand, concrete, water etc.)
For example, clay or other silt masses and salt water are almost opaque for GPR. But sand, gravel, ice and concrete are the best probe objects.
The soil usually has mixed layer structure. So for having better probe results you should know (if it's possible) what the soil composed of. It will allow user to adjust GPR settings. When that is not possible to know, you can interpret received profiles qualitatively only.
The depth of exploration also depends on the frequency of emitted electromagnetic impulse. The higher is frequency, the higher is GPR resolution (e.g. you should use VIY3-700 (70MHz) when you search for the shallow buried pipes).
But if the higher depth maters you should use GPR of a low frequency (e.g. VIY3-125 (125 MHz)).
Depending on underground material structure, depth of probing can vary from some decimeters to 15-30 meters.

Why can not I change the power level of GPR signal?

First of all, the maximum generated level of radio emission is strictly regulated by government. The radio signal of high power will interfere with other working devices and receivers (e.g. cell phones, TV, broadcasting).
Second, along with increasing depth of exploration, GPR power must increase exponentially. So in other words, considerable increase of power leads to a very little addition of explored depth.

Which speed should I move with during the measuring process?

For example, you can choose distance between traces as 10cm with set parameters Sample amount-500 and Stacking =5, that corresponds 14.52 traces/sec.

The calculated antenna unit speed is:
v = 0,1 * 14,52 = 1,452 ≈1,5 m/sec
The calculations above are given for reference only, because the GPR VIY3 software calculates that automatically and system makes a sound signal when speed limitation is exceeded.

What is represented on GPR profile?

The final result of GPR probing is a GPR profile that represents the set of reflected (or scattered) impulses:

The reflections occur along with electromagnetic materials properties change on the way of the wave spreading. The main parameters are:  dielectric and magnetic permittivity, and electrical conductivity of probing material.
Dielectric permittivity influences on signal spreading speed. The signal attenuation depends on the electrical conductivity of material.
The signal reflections occur when the incident wave changes its speed or intensity (signal attenuation).  The more considerable electromagnetic properties of material change, the reflected signal is more intensive.
The shapes of mapped objects do often differ from their physical shape.  Little objects (and their cross-section) are imaged as a parabola on GPR profile. The top of parabola becomes flatter when the object size increasing. When boundary geometry dimensions of object comes closely to signal wavelength, diffraction occurs and target geometry gets difficult to distinguish.

Image 5. Principle of reflected signals representation on GPR profile. The distortions of signal in reflection points are shown.

Which environment speed should I choose?

Mostly always you can predict dielectric properties of probing ground in advance. So before probing you should set approximate speed or choose from the list in Synchro3 software (if it's possible to define the ground type).
For the profiles gotten from Odometer the next function becomes available:

Hyperbola
To measure the wave speed with the help of Hyperbola method you should match red reference arc (related with fixed speed) with the top of object arc as showed below. Changing reference arc speed you can match both reference and measured arcs. When it's done - signal speed is defined.

Yes, that is necessary. We carry out regular running trainings to operate VIY3 GPR.  The trainings take place in our offices in Kiev, Ukraine  and Marl, Germany.
The training is free of charge when you buy VIY3 GPR. The training lasts for 2 days.
Also we hold our practical trainings on exhibitions and seminars where we participate.
We also hold additional paid trainings by agreement.
We are sure that almost each person working with computer can learn to work with VIY3 GPR.

Is GPR emission is safe for people's health?

Despite the presence of "suspect" word "radar" in the acronym of GPR, it is absolutely safe for people's health. The impact level of GPR on people is less than 1% from a common mobile phone power level.

Can I distinguish the type of material the object is made from?

GPR can detect each object, both metallic and non-metallic. On GPR profile you can see electromagnetic wave reflections from all types of underground objects that differ from environment around them.