Within the scope of cooperation with Taras Shevchenko National University of Kyiv in geological and archaeological explorations, Transient Technologies LLC granted its GPR set to University.

1) Last autumn research group of archaeologists and geologists from Taras Shevchenko National University of Kyiv on the request of the Northern permanently-working archaeological expedition of Archaeological Institute of National Academy of Sciences of Ukraine made an exploration of the moat around Rzhischevs castle (Kyivska oblast) using VIY2 GPR with working frequency of 300 MHz.
During the exploration there was a bottom part of the former moat found. The later investigations found out that the moat between the western bank and a old bastion had deepened part that joins the bank. The moat bottom, probably, was paved with stone items or baked. That led to surface formation that has dielectric properties contrasting with adjacent layers.

2) In September 2015 the geophysical explorations were carried out in Saint-Miclosh castle (Chenadeevo village, Zakarpatska oblast). As a tool was chosen VIY2 GPR with working frequency of 300 MHz.
The main goal of this work was to discover an underground passage that, by legend, connected the castle with Nikolayvska church placed in 150 meters from the castle.
The underground passage was seen for 16 meters only from churches altar towards the castle. Also there were found a few old burials on churchyard, probably in stone sarcophaguses. Besides, in one room of castles vault there was found a hidden storages ceiling.
As a result of these works there was made a decision to open an archaeological investigation in 2016 year. 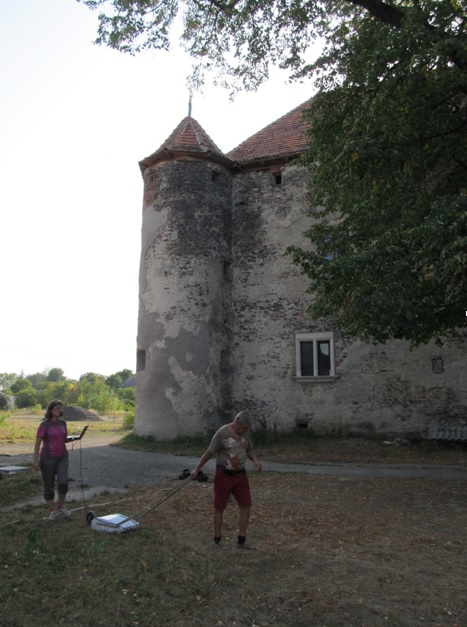